Why learn Latin in 2018 if you’re not a member of the catholic church? Or Greek if you’re not greek? Well, both are great at putting things in context and highlighting commonality: Latin does this for the romance languages and Greek does this for much scientific terminology.

And, Ed, a 46-47 year old positively archaic text editor, does this for parts of the Unix userland that are still very much in common use (specifically sed, awk, grep, vi), as I learned from reading Michael W Lucas' new book Ed Mastery. 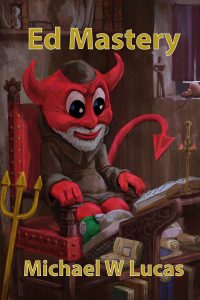 It was published on April 1st. It focuses exclusively on a tool that no-one bar the neckbeardiest of neckbeards has used in recent decades. Its interface is beyond parsimonious: it doesn’t even print your file to the screen by default (as it was designed in the era of teletypes). And yet…and yet learning its obscure interface was oddly enlightening as its most powerful features, the abilities to

were incorporated into many of the Unixy tools we used today. In some cases the syntax is common to Ed and ‘modern’ tools; in other cases its just the ideas that are shared.

For example, in Ed you can run the command

to move (m) all lines in the buffer (g) containing nice_ferret to the end of the buffer ($). The same works in vim if, in command-mode, you enter it after a :.

You can also print out all lines that contain the regular expression re using g/re/p - now why does that look familiar?

In short, sure, you could the book’s something of a joke and a large chunk of the material is on the basics of regexes, which may already be familiar to you, but it’s still worth a read. Plus it might give some Vim Golf pros a new challenge to get their teeth into!